Lately, I don’t write stories about DXpeditions I wasn’t a part of. However, I was invited to join 3DA0WW, alas on a short notice, and had to decline due to business obligations and COVID-induced inconveniences for world travelers. It would have been fun to take a trip to a mysterious South African land-locked country far away. Instead, I offered my assistance to the DX group with their publicity, so the Ham World would know just a bit more about their undertaking. Those of you who followed this story must have seen the photos and operational tidbits I posted.

Every DXpedition follows pretty much the same scenario: we decided; we gathered and travelled; put up antennas, connected radios, operated and came home. That is all there is to it, no matter how far one is going and however simple or complex the trip was. Majority of DXpeditions leave no trace of themselves afterwards, except scattered worldwide cluster and logbook entries, and maybe few photos here and there. Few participants ever talk about places they visited and matters outside of the operation itself. I find it regretful. Most of us would never ever get to go away, leaving work and family, to visit all those exotic, out of the way places that make DXing so much fun on this end of the pile-up. Learning something about the world out there would be an enriching experience.

What you will find below are transcribed conversations with one of the 3DA0WW ops – Paul (a.k.a. Pavel or Pavlo), UU0JR. Paul lives in Kyiv (Kiev), Ukraine. He was among the ops group that also included Yuris YL2GM (Team leader), Jack YL2KA, Alex UT7UV, Wlad US7IGN, Vlad UW7RV. If you look them up individually, you may find that almost everyone is an experienced DXpedition and contest operator and have been few places around the globe. So it was a fine team.

We invite you to refer back to the photographs posted here earlier, for the visuals of the trip.

Every DXpedition is a gamble of sorts. No matter how carefully you plan one, there are always unseen “monkey wrenches” along the way, ready to cause pain or de-rail the undertaking. These days even more so.

Yuris YL2GM and Jack YL2KA flew out of Latvia’s Riga Airport, going to Johannesburg, South Africa. The rest of the team left from Kyiv, via Dubai to meet them there, for the final flight to King Mswati III International Airport in Lubombo, Eswatini (also known as Swaziland). And so they did, but not without some difficulties. None of the Ukrainian participants had S. African visas (who knew?) needed to walk out of the Johannesburg airport arrivals area, to retrieve the luggage and re-check it for the outgoing Eswatini flight. Checking the luggage all the way to the Kingdom was not an option in Kyiv. A solution was found, but not without some last minute frantic phone calls and moves just before the flight was to take off. For our own reasons, we’ll keep it a bit of mystery

Surprisingly, Eswatini is a very civilized place. Modern, clean and most certainly among some of the more economically advanced African countries. The lodge dispatched 2 vehicles to meet the ops at the airport and transport much DXpedition luggage and people to Lobamba, a location some distance to the north of the airport. I asked Paul if they ever got to see the capital (there are two of them in the country). I was told that they wanted, but couldn’t, as there were civil disturbances there. The reason? To-date, the king has fifteen wives with many kids; plus twenty royal palaces. Every wife had been gifted a pink Rolls-Royce. The subjects weren’t happy of the arrangements and were not shy showing their displeasure. But outside of these protests, it is a very peaceful country.

The place where they stayed consisted of multiple dwellings. The five acres area was home to owner’s house and three separate guest villas. They rented two villas for their operation. The lodge territory had banana palm trees, peach trees, pineapples growing on the ground; also a set of three fish-breeding ponds. The owner, Willy, is a 76-year Christian man with two wives and two kids (?), about 10 and 15 years old, originally from Mali; he lived in South Africa for 10 years and finally moved to Eswatini, and loves living there. He confined to the ops that he is paying $400 per month medical insurance for just himself, but the level of coverage is such that he can be instantly helicopter-transported to South Africa in case of medical emergency. The country has good schools and requires high-school education for kids; some type of medical coverage is available to all.

There is a lot of construction and road repair taking place everywhere. Chinese investors are ever-present, offering to put the funds into every available project. Local land serves as collateral, so a lot if it is now in foreign hands. Local salaries hover just above 50 USD per month. Agriculture is the main staple for many of the kingdom’s subjects.

The lodge happened to be up in the mountains, almost ¾ mile (1.2 km) above sea level. It would have been a terrific place, except it was line of sight with the capital some 8 km away. No one ever thought how the city-generated RF noise so far away would be impeding their radio signal reception. Concurrent 3DA0RU DXpedition was operating from a quieter country location at 400 meters above sea level, 40 km further to the south; based on the number of Qs they made on low bands they didn’t have this problem.

Since the lodge didn’t arrange for a chef to the gang, most cooking (and food serving) was done by Alex, UT7UV. Paul found prices in local supermarkets quite reasonable; he would have spent more money on food if he stayed home. The kingdom has 1.6 million subjects, 52% of whom are AIDS carriers and 30% are infected by TB (per WHO data). The DXpedition participants decided that personal health would be of greater value than restaurant-quality meals, so they didn’t bring in any locals.

I was curious to know if the locals had paid any notice to the obvious foreigners and was told that no one showed any interest to them while they visited.

Renting two villas was great, but there also was a negative side to it. The two groups were separated; and no one though of bringing handy talkies for local “tactical communications”. Low band antennas went up at YL2GM’s place, while Paul’s and Alex’s QTH was doing most of the higher frequency operating. Lowband position had experienced all sort of technical issues with noise, equipment malfunctions, and the antennas needed attention. We earlier wrote about “agent provocateur”, a local Rhodesian Ridgeback. The dog instantly became fond of antenna guys wires and chewed through a few, bringing two antennas down. After being “secured”, the canine managed to escape to wreak additional havoc. Could you have guessed a local dog can become a DXpedition peril? Naw, a “dog chewed my homework” is the stuff students tattle their teachers, to get out of trouble. But it did happen.

80 and 160 meter position encountered serious obstacles. Noise was a major issue. They began to make 80m CW contacts only after US-directed beverage was installed. Most North American contacts happened just before their sunrise, when the noise levels went down and they started hearing the pile-up callers. At U.S. sunset 80 meter vertical was hearing better, but the beverage brought in better North American signals at DXpedition’s sunrise. They had a cellular tower nearby and that must have complicated things. In the direction of Europe and North American lies the country’s capital a mere 8 km away, in a line of site from the mountain they were on, bringing in all sorts of RF interference.

Yuris’ location had at times lost all reception on 24 and 28 MHz due to severe interference. Paul thinks that the reason was villa’s utilization of 10 MHz channels for “internet over power lines”. There were a couple of internet boxes there, one of which was plugged into AC outlet. Most SSB contacts were made by UT7UV. Paul did about a 1,000 CW QSOs, but his domain was FT8, which afforded contacts in the most hostile interference environment. An interesting twist on K1JT software: “3DA0” prefix format was not recognized by the software algorithm and the callsign could not be FT8-transmitted. Neither 3DA0WW nor 3DA0RU could use K1JT – switching to Bulgarian MSHV software instead. FT8 aficionados, take notice!

If you had CW contacts with DXpedition, thank Wlad US7IGN. He tirelessly worked through the pileups, day after day.

Weather was another disturbing factor. When one thinks of Africa, one often imagines jungles or deserts. Neither was the case here. Paul reported that at times he was fully dressed with street jacket on, lying in bed under the blanket and couldn’t get warm. It was cold, damp and windy – all at the same time. First few days were hot African days, but it soon became very windy every evening, to be followed by rain, dense fog (in reality those were low-hanging clouds). Fog deposited plenty of condensation on metal antenna parts wreaking bedlam with antennas’ SWR. Atmospheric static had once resulted in an explosion like burst with sparks flying from the PL-259 connector of an unconnected coax.

DXpedition had its share of “frequency police” and other baddies, spoiling reception for calling DXers. But one “bad dude” really gets the trophy. One EA7ST had made dozens of contacts everywhere, calling them every 15-20 minutes. DXpeditions’ ops were quite angry. At some point they stopped logging him. They chased him away and he came back next day with another EA7 callsign to continue calling. They could not explain such behavior.

24 MHz pileups to North America and Europe were quite fierce, reaching six QSOs per minute at times. They were called by North and South American stations, along with Europeans and Japanese, all at once – for some very memorable experiences.

Lodge owner had some very interesting electrical arrangements in the villas. Few times electricity shut it off for several hours. The ops patiently waited for it to come back only to learn that electrical meters automatically shut electricity off after reaching daily x kW consumption limits. A maintenance guy with special equipment showed up twice in Paul’s memory to authorize higher consumption per day. If you plan on electricity-intensive bitcoin mining, this particular location would be highly unsuitable for that purpose. But, on the positive side: six people renting two villas for two weeks paid a mere 1,800 dollars.

Despite all issues, DXpedition managed over 31,000 contacts. See the table below 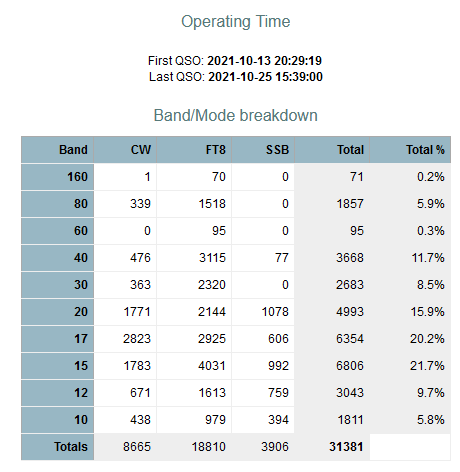 Paul and myself wish to extend our gratitude to all who donated to the DXpedition fund. Complete DXpedition logs were quickly uploaded to LoTW, probably making a lot of you very happy

I want to thank UU0JR for the operational tidbits, photos throughout the event and fine details that served as basis for this article.

And now something that would be completely out of character for me, but is justified under the circumstances: I want to give myself a pat on the back for the job well done. For volunteering; for posting timely images and comments telling the story of 3DA0WW. Alas, the DXpedition organizer never acknowledged my role in any of it; never even thanked me for this labor of love. But you can’t teach manners to grown up men. Nothing further to be said.

73 to all and thanks for reading