Sunspot counts for Sept. 2021 were the highest in more than 5 years. And, for the 11th month in a row, the sunspot number has significantly exceeded the official forecast. 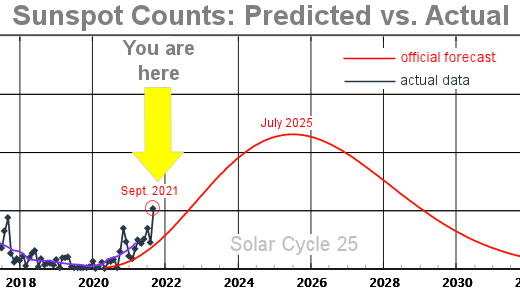 The plot above shows sunspot counts vs. time. The red curve traces the forecast issued by the NOAA/NASA Solar Cycle 25 Prediction Panel in 2019. It calls for a relatively weak solar cycle peaking in July 2025.

The sun has a mind of its own, though. Higher-than-expected sunspot counts suggest a stronger cycle, with a peak occuring in late 2024 instead of mid-2025. This is good news for aurora watchers, but maybe not so good for the Internet.