NEWS UPDATE –  A video has now been produced showing the expedition journeying through the Arctic. Although in Russian language, it’s still worth a watch. UA9KDF is also now also sending out QSL cards.

[WRITE-UP] The polar snowmobile expedition R150WS from the “Legends of the Arctic”, which activated Rykachev Island in the rare group of islands in the Kara Sea – Kara Sea Coast East group, IOTA AS-104, finished at the end of March in the Yamalo-Nenets Autonomous Okrug. 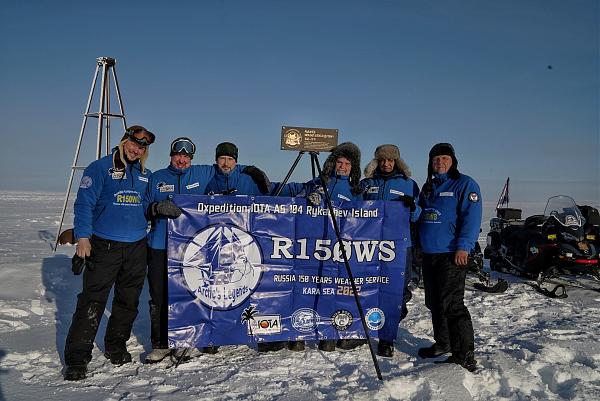 The expedition went on the air from Rykachev Island and was dedicated to the 150th anniversary of the creation of the Russian weather service (Weather Service).

The expedition installed a commemorative plaque on the island to Mikhail Aleksandrovich Rykachev, director of the main geophysical observatory, in honor of the 150th anniversary of the creation of the Russian weather service. 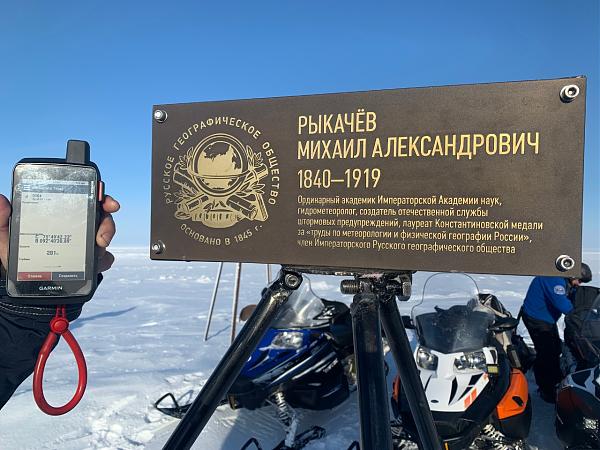 While on about. Rykachev, an ice reconnaissance was carried out and an attempt was made to reach Isachenko Island (AS-050) ~160 km to the north. It was possible to make the transition only 23 km to the islands of Kruzenshtern. In this part of the Kara Sea, there are a lot of cracks, hummocks, and there is ice drift. According to information from the captains of the icebreakers “Yamal” and “Vaigach”, an “ice river” was noted in that area – a severe and dangerous phenomenon. After all, snowmobiles are not an amphibian and not a vehicle capable of crossing open water… The activation of a rare group of islands by Sergey Kirov is a goal for future expeditions!

The route of the expedition was difficult and ran through the snows of Yamal and Taimyr, frozen rivers and lakes, and the ice of the Kara Sea. Negative temperatures below -30*C and below, spending the night in the tundra and on the ice, piercing wind while riding snowmobiles… Victor Kuzyakin RW0BG got frostbite of fingers of the second degree, Andrey Moiseev UA0BA fell on the ice from a snowfield, split his helmet – as a result of a concussion and a bruise sternum. Traveler Aleksey Bystrov was injured on the way home, 150 km from Sopochnaya Karga. They, together with Andrei Korobeinikov UA9LDD, fell into a ravine, managed to jump off the snowmobiles, but Alexei was hit by an overturned sled. As a result, the shoulder joint was knocked out, a fracture of the humerus. In this state, he drove for almost 200 km more. Now Aleksey is in a hospital in Dudinka. We wish you a speedy recovery! Brave guys! 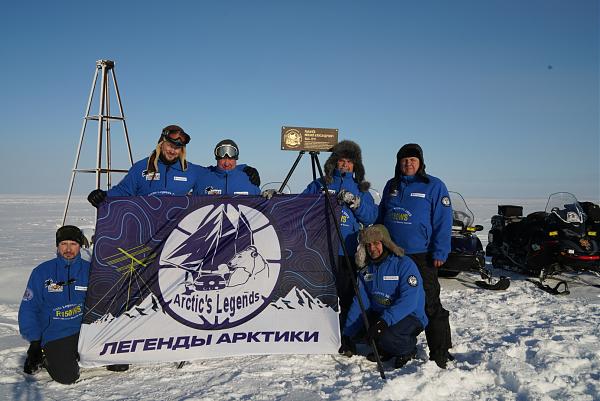 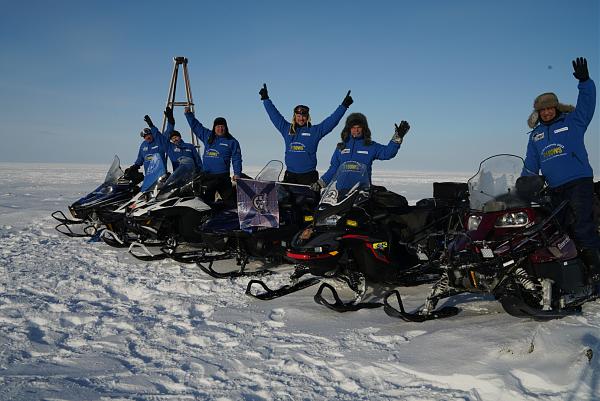 Congratulations to the polar “Russian Robinsons” on completing the expedition and returning home. We will wait for the creation of a documentary about how the extreme journey “Legends of the Arctic 2022” took place.

At night it got cold to -20. At 05-20 the heat gun stopped working. Part of the team spent the whole day doing repairs. A backup option has been implemented. The temperature in the tent did not fall below +12. During the day, the bright sun helped us to cope with the problem of heat. By the evening it was +20 in the tent again. Another event that warmed us. TV and radio company Tyumenskaya Vremya decided to make a short report about our trip (video below). To do this, a radio link was established between the collective radio station of Tyumen, where a journalist from the Tyumen time was present, and us. Of course, our friends and colleagues accompanied this radio communication session. Audibility was excellent, everything worked out. By evening, 4,000 connections had crossed the line. The weather is -27, the south wind is getting stronger, it is throwing snow. Tomorrow we plan to install a memorial plaque to Mikhail Alexandrovich Rykachev, raise the flags of our clubs and partners. The team is in order. Good mood.

The first night on the island was uneventful. Everything works fine, we sleep in the warmth. During the night, the equipment warmed up. In the morning the weather gave us a gift! -9, there is almost no wind and sometimes the sun peeps out. And so the whole day. We assembled and installed two antennas, went on the air by lunchtime. At 22 pm we had about 700 QSOs, while the passage is pleasing. Colleagues who are not involved in the Radio went on reconnaissance in the direction of Isachenko Island AS-050. They only reached the Kruzenshtern Islands, 23 km from Rykachev Island, it was not possible to go further because of the large hummocks. Tomorrow there will be a few more trips and, weather permitting, reconnaissance by quadcopter.

Arrived on the island and now setting up camp. Look for first signals soon.

The team continue to make good progress and should be on the island imminently.

R150WS team now approx 150km from the island. They have one more journey to make before arriving there.

The team is now complete. Two snowmobiles have also been repaired before they start the journey to AS-104 tomorrow (March 13, not the 12th as originally planned). Next stop is the “Noskov Hut” at the confluence of the Pura and Pyasina rivers. This hut was also used in 2020 during the RI0B DXpedition.

The team are still in the same location as shown on the map below from a few days ago. They are waiting on the rest of the crew arriving from Norilsk before all heading off to Rykacheva island on March 12.

The R150WS team continue to travel to Rykacheva island, AS-104. Their progress can be seen here and they update their diary here.

On March 4, 2022, a snowmobile expedition “Arctic Legends” R150WS to the Rykacheva Island, Kara Sea Coast East group (IOTA AS-104). This expedition takes place under the flags of Russian Robinson Club and Russian Geographical Society and is dedicated to the 150th anniversary of the Weather Service of Russia.

Participants will make the transition from Yamal to Taimyr region. Further, the route will pass along the coast of Khariton Laptev to the polar station “Sterlegova”, where the expedition is waiting for a previously delivered fuel supply for a trip to Rykachev Island and vice versa. The length of the route is 2800 km. You can follow the expedition on the track, read the diary from the route here

Rykachev Island is located at the entrance to Middendorf Bay in the south-eastern part of the Kara Sea. Island named in honor of the founder of the weather service in Russia, a famous scientist meteorologist, Director of the Main Geophysical Observatory, Admiralty General, academician Mikhail Rykachev (1840-1919).

Work on the air R150WS is planned on bands 40-10m CW, SSB and FT-8. The expedition is equipped with the necessary polar equipment and camp equipment for autonomous work in the harsh winter conditions of the central Arctic.

The expedition team is studying the possibility of reaching Isachenko Island (reserved call sign RI0BI) in a rare group Sergey Kirov Islands (AS-050) and will make a decision on the spot, which will depend on the state of the ice and the presence of open water in this part of the Kara Sea. The island is 160 km away from Rykachev Island to north. Landing on the island and airing will be a great success for the “Arctic Legends” team.