This morning, a D60AE delegation made up of F2DX and HB9GWJ was received by the managing director and the technical director of the ANRTIC (National Authority for the Regulation of Telecommunications) in order to advise them with a view to the development of amateur radio in the Comoros which currently has no resident ham radio.
All the equipment is now packed and ready to go to the airport. We will take off at 5:20 p.m. heading for Tanzania and then Ethiopia. We finally end with 73,092 QSOs. Note however that all the QSOs made yesterday on 6m FT8 are the work of a frustrated pirate (59+20 in Portugal). 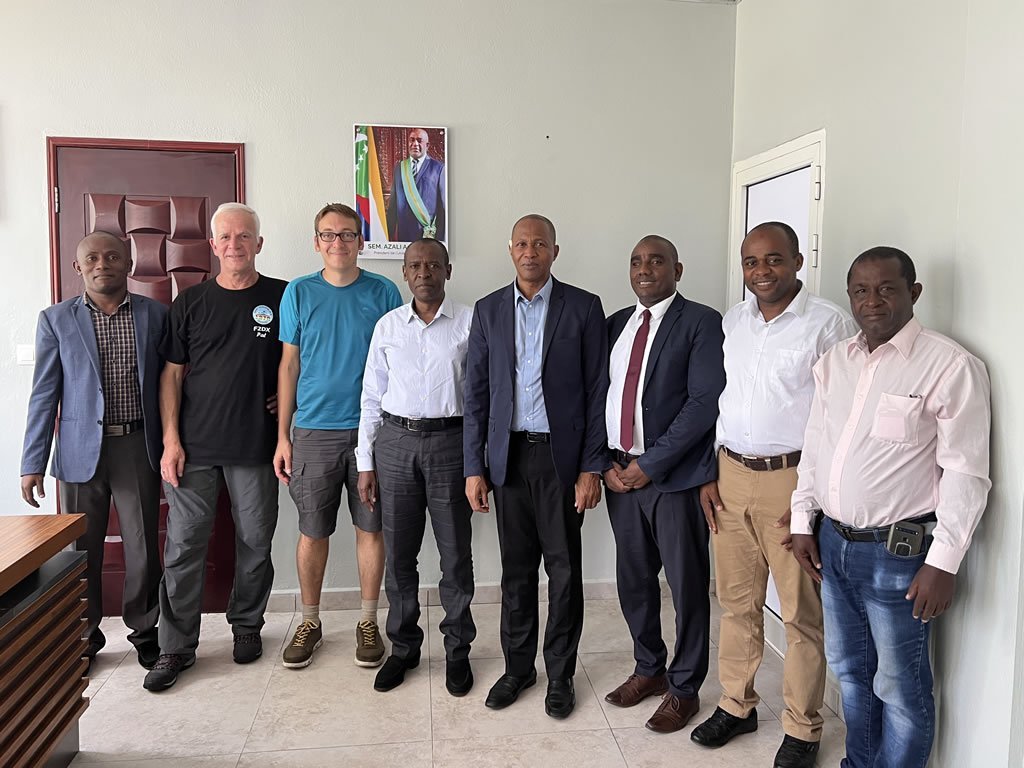 OCTOBER 16 – D60AE DXpedition is coming to an end soon with over 70K QSOs in their log. Please note, today on 6m FT8 there was a pirate. To finish, here’s a “goodbye” video produced by F2DX:

Our two Irish friends have already left yesterday. Tomorrow, Monday October 17, from 6:30 am we will dismantle the antennas and pack the equipment. All baggage must be ready by 12:00 p.m to be taken to the airport. From midnight, the majority of operators will sleep for a few hours tonight. We finally passed the symbolic bar of 70,000 QSOs in 11 days of traffic. After reading all your comments, we can deduce that you are satisfied with the result. This is our greatest satisfaction. After the usual corrections, our log will soon be on LoTW. F6KOP will not make you wait 6 months like some DXpeditions, and of course will not charge for LoTW confirmations.

Yesterday, two sworn officials from the ANRTIC (National Authority for the Regulation of Information and Communication Technologies) came to check our stations. A few spectrum measurements have been performed. Our D60AE licenses have also been officially handed over to us. The morning ended with a meal offered by F6KOP at the hotel restaurant. OCTOBER 14 – Here’s a new video by F2DX showing D60AE in action. Also worth noting there’s been many internet and power outages recently so the next log upload / update might be delayed.

Lots more power outages since last night. By the way, we were a little worried because the hotel was almost out of gasoline for the generator. The other time, it was an electrical wall socket, this night it was the power line that melted. Fortunately, we have an electrician on the team.
Apart from these few local details, our equipment is working well and we have now exceeded 50,000 QSOs. Part of the FT8 log is missing because we had a time problem on a PC. This will be rectified soon.

Good news: Our two Irish friends have finally had their suitcases. Moreover, it should be noted that they will leave on Saturday because they had no other option with their flights. 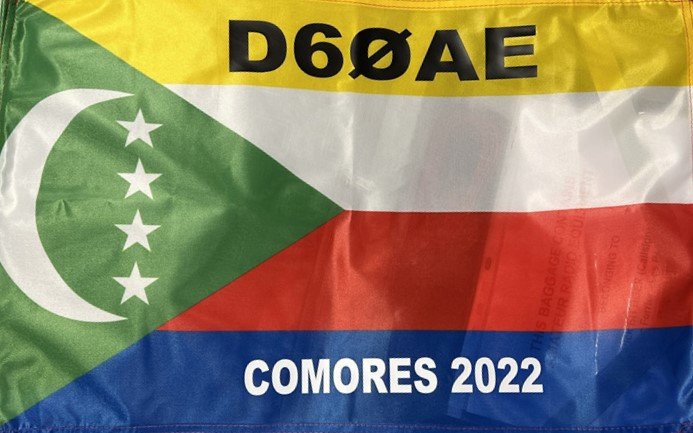 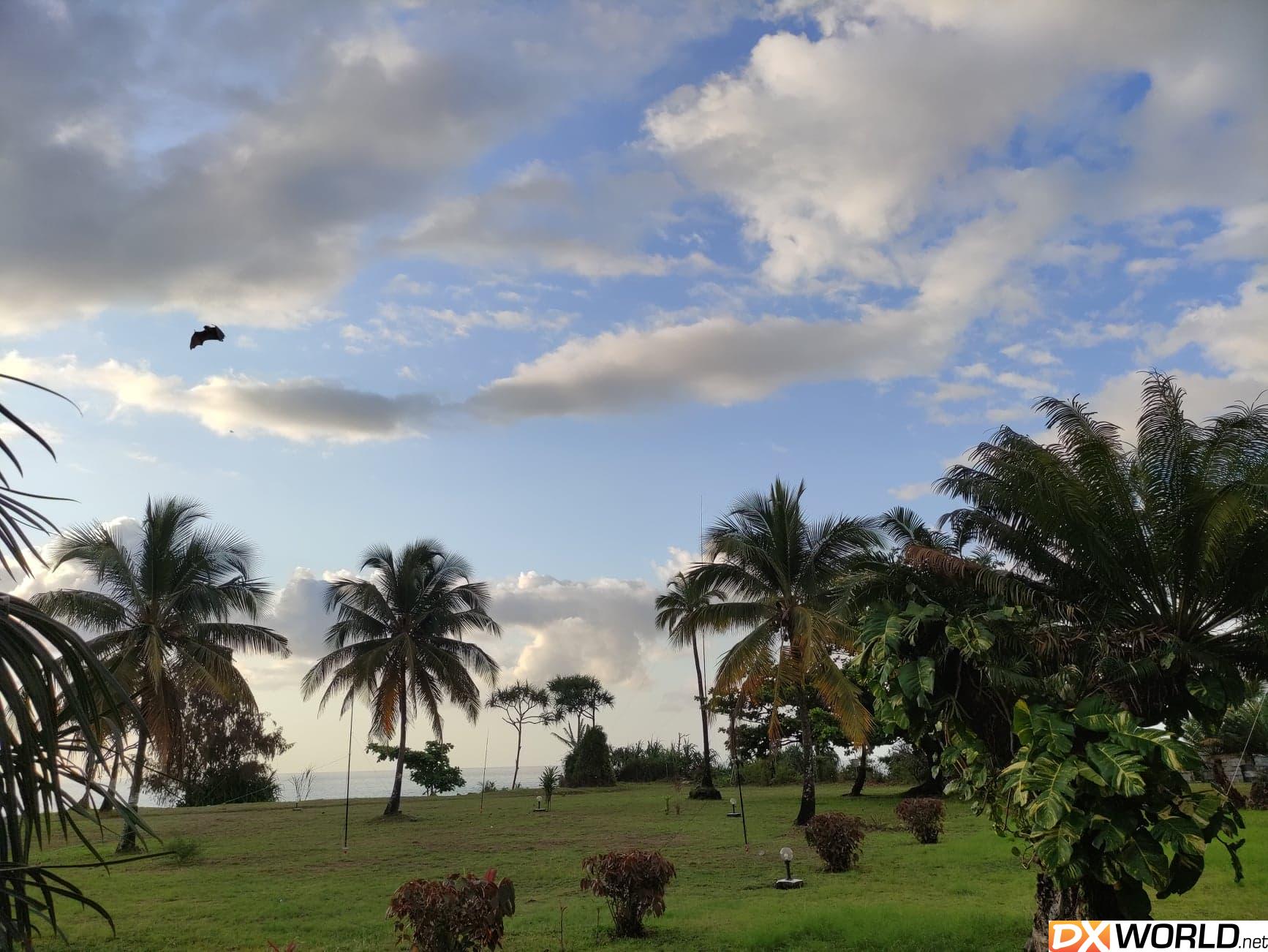 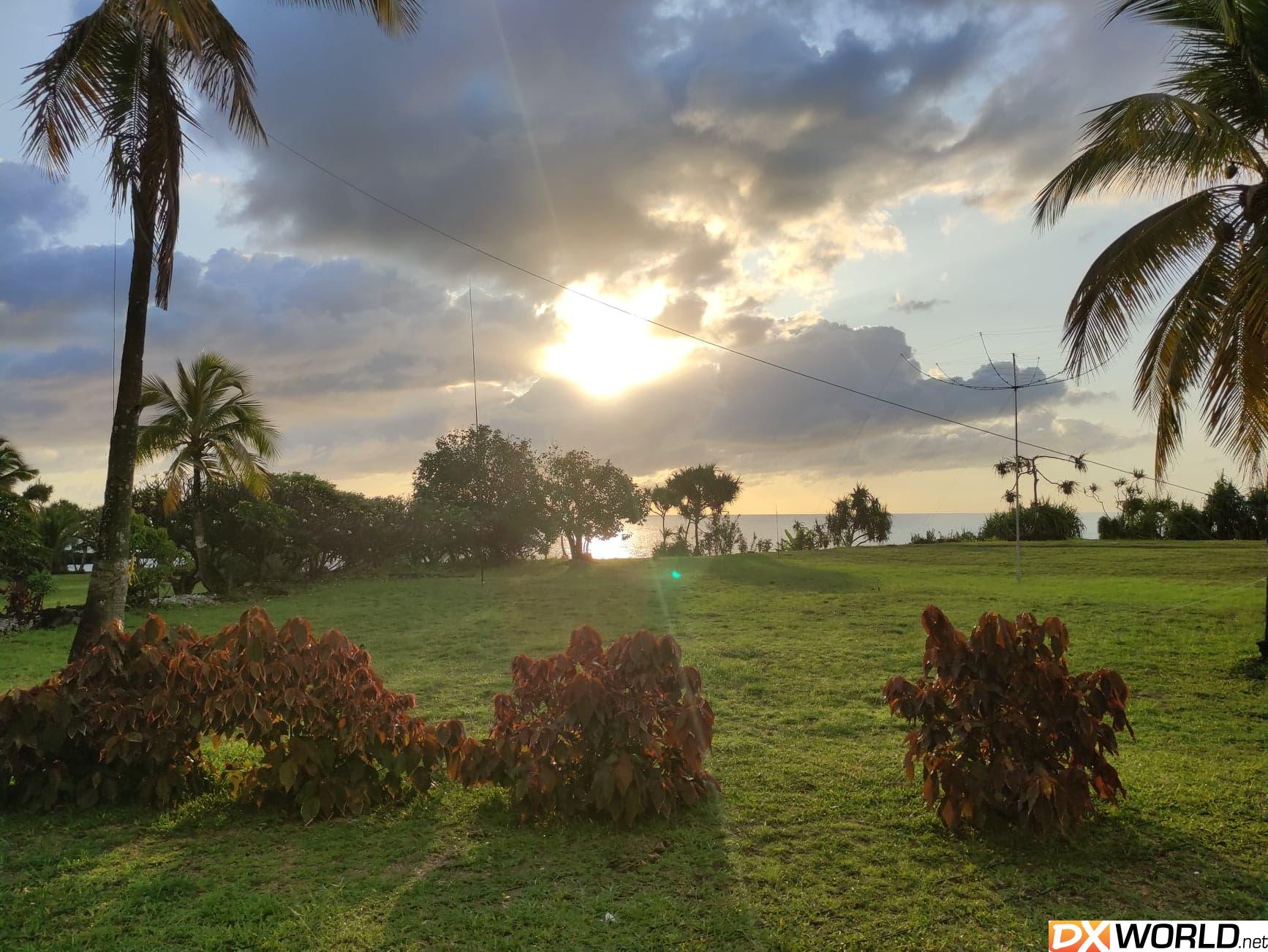 OCTOBER 11: Except on 10m, propagation conditions were less good today. On the other hand, it can’t be perfect every day. We had several power outages. The generator takes over but not instantly, and it’s the same when the mains returns. We also avoided the start of a fire because of a wall socket which was overheating and whose strong smell of burning fortunately alerted us.

160m is still just as horrible and it’s not much better over 80m. Failing that, we left a 160m station in FT8 running. We worked on the Beverages again today. As the ground is made of lava rock, the earth is of very poor quality. But at least we won’t be able to tell ourselves that we haven’t tried.

Concerning FT8, some people ask us because their QSO is not validated. You should know that our stations operate automatically and are managed by a single operator (who also works RTTY). After CW, we also did FT8 on QO-100 today. We were hacked on 6m: Be careful because our signal shouldn’t be thick given our 50w in only the 2 elements of the Hexbeam antenna.

A word about the weather to finish. Since we arrived, it has been raining every day (often all afternoon). We weren’t used to seeing this during our previous expeditions to Africa. Our Irish friends have still not had their luggage and incidentally we are therefore still missing an amplifier.. 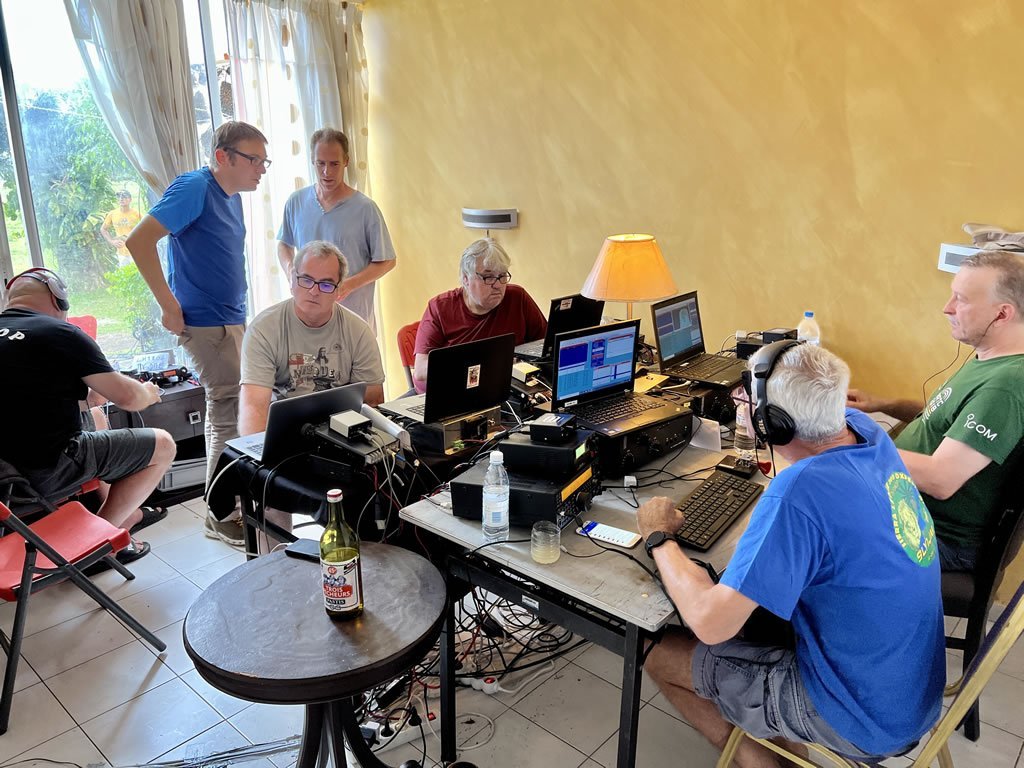 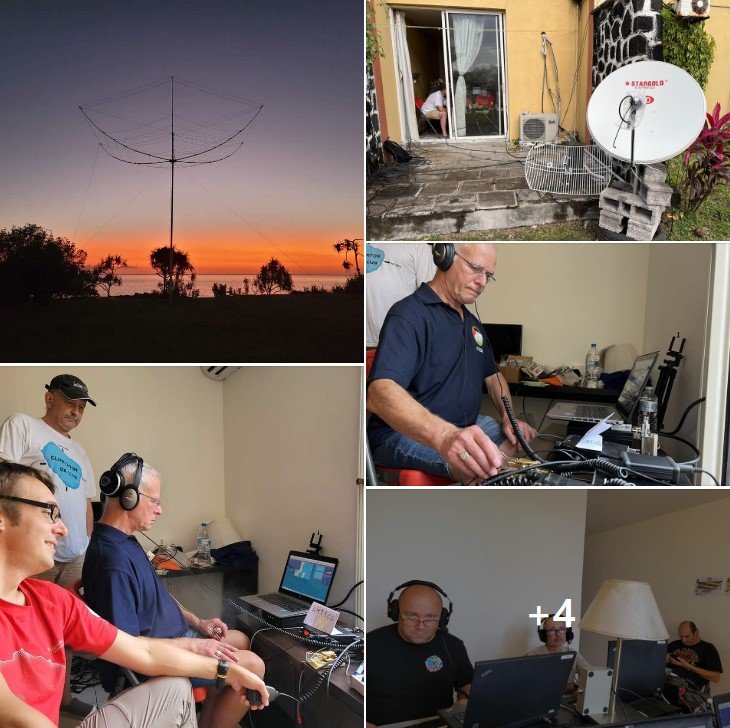 OCTOBER 8 – Many thanks to co-leader F1ULQ for sending the pictures below showing operations in full swing. 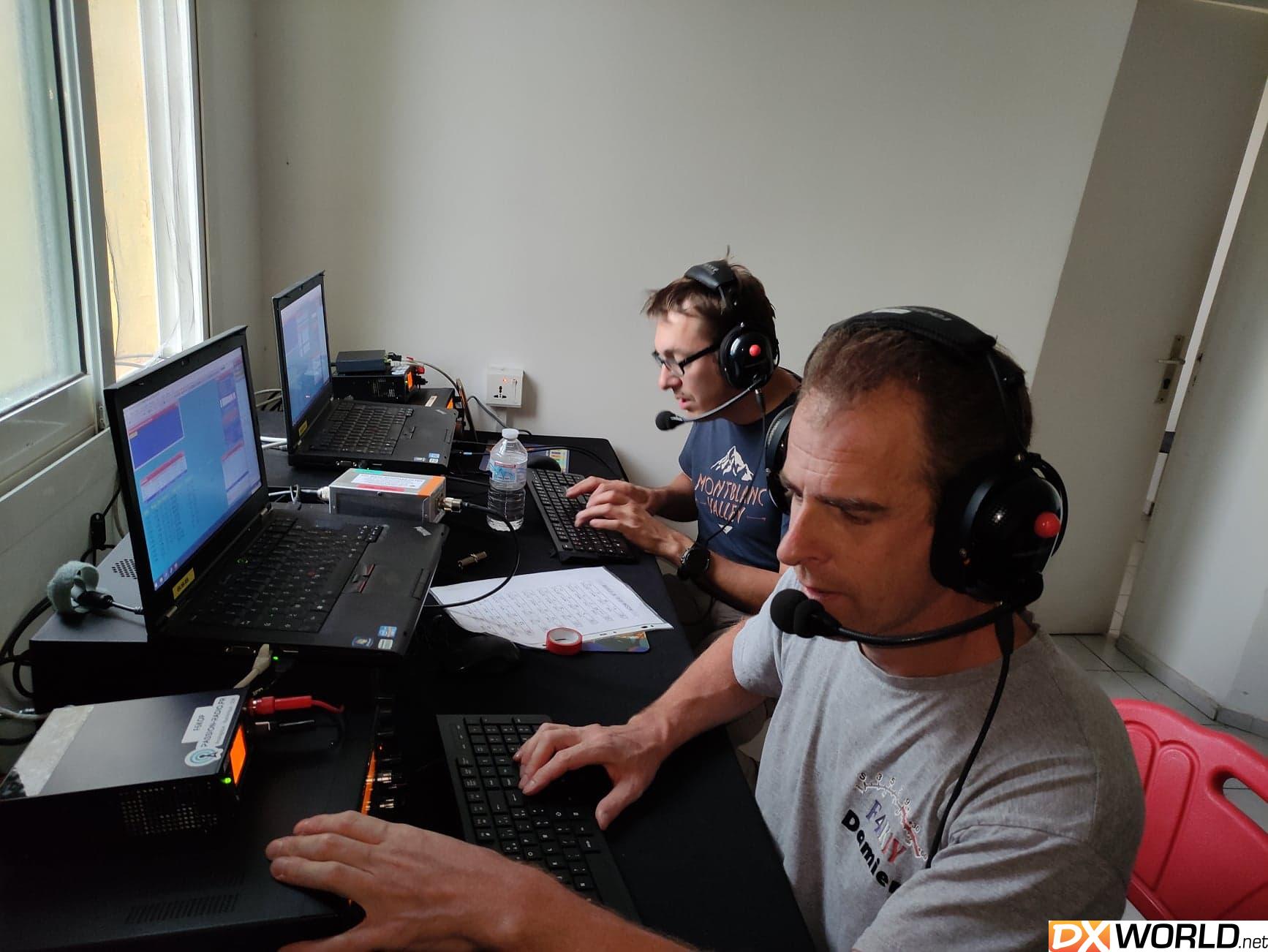 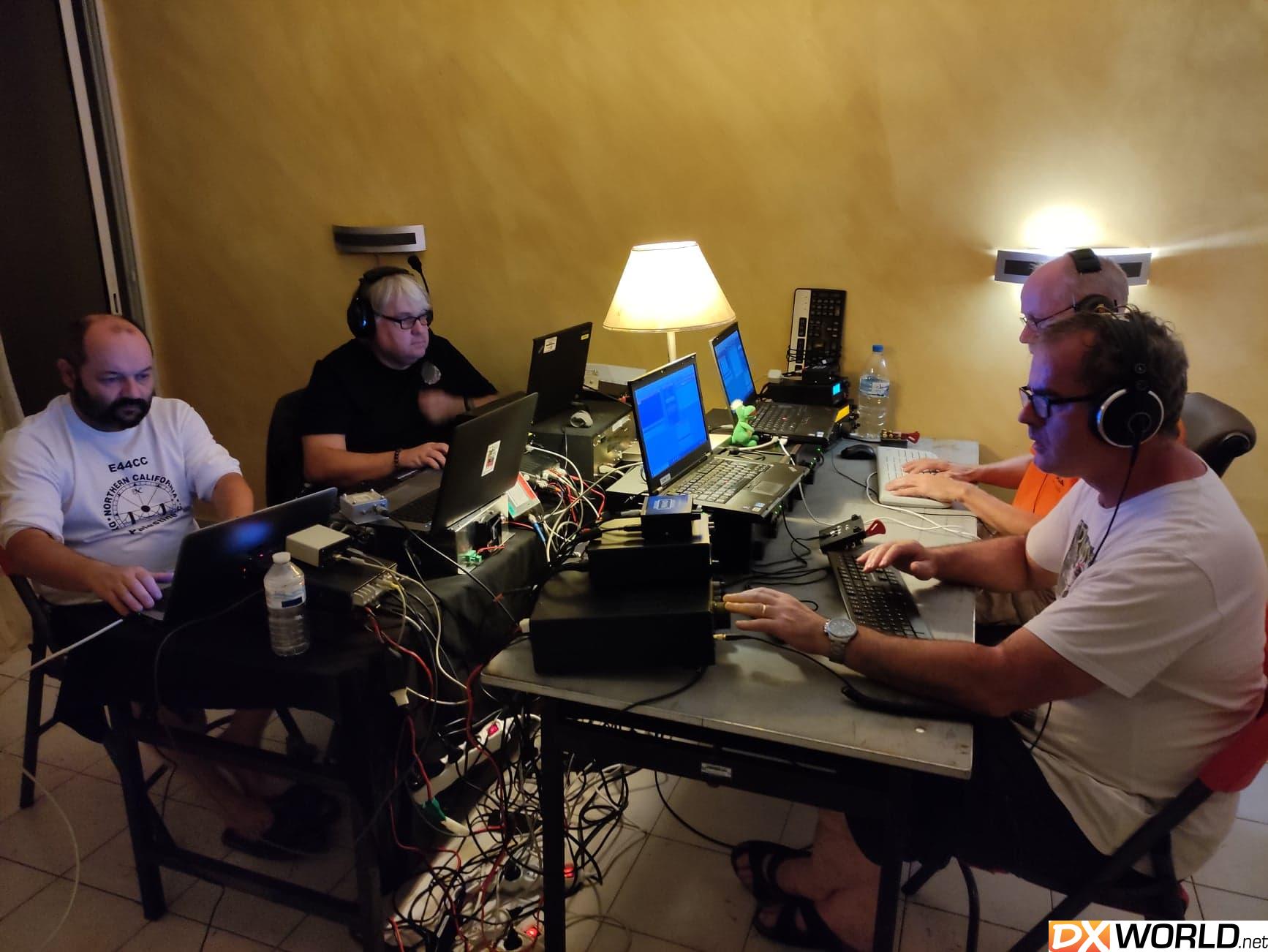 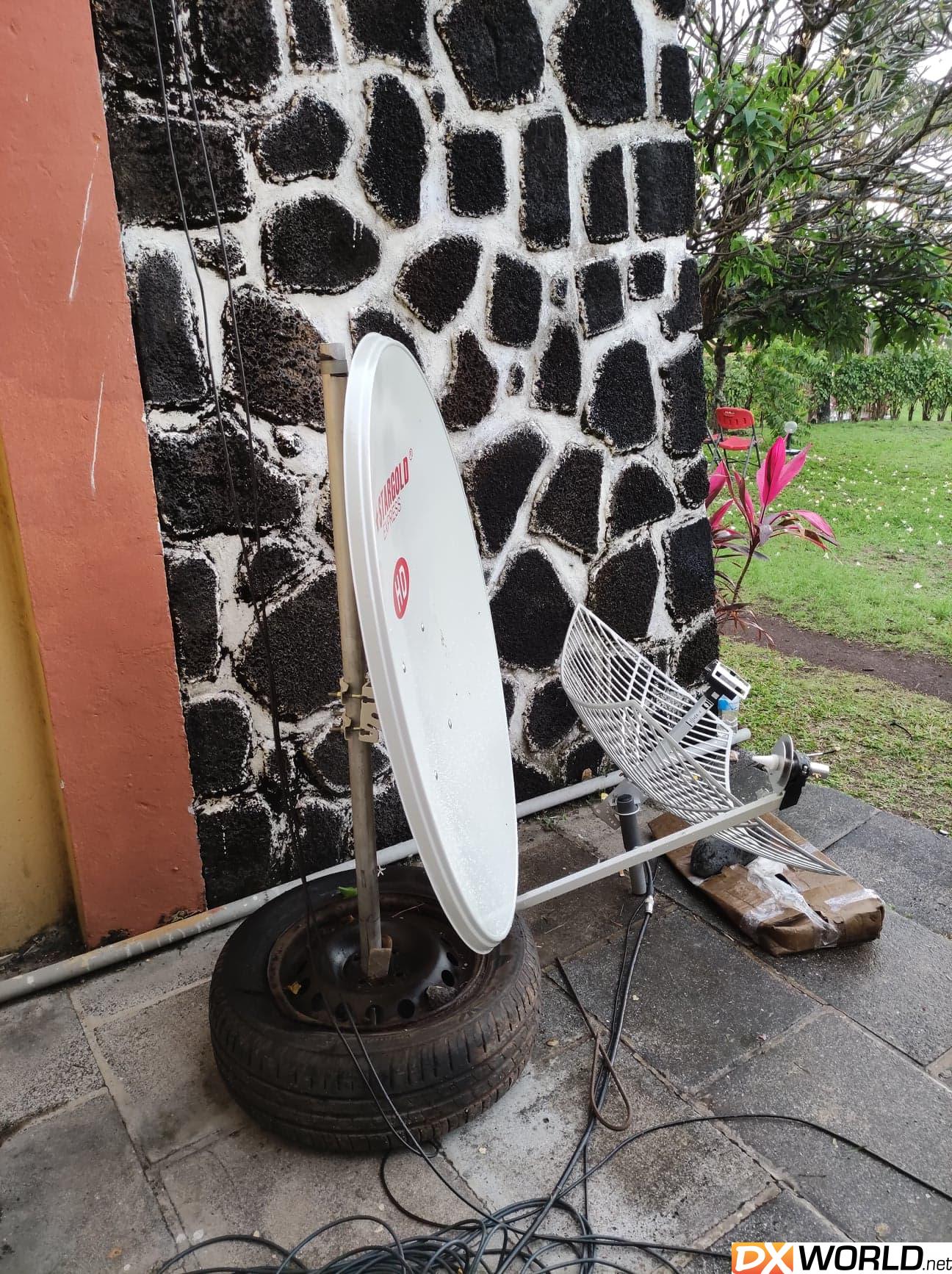 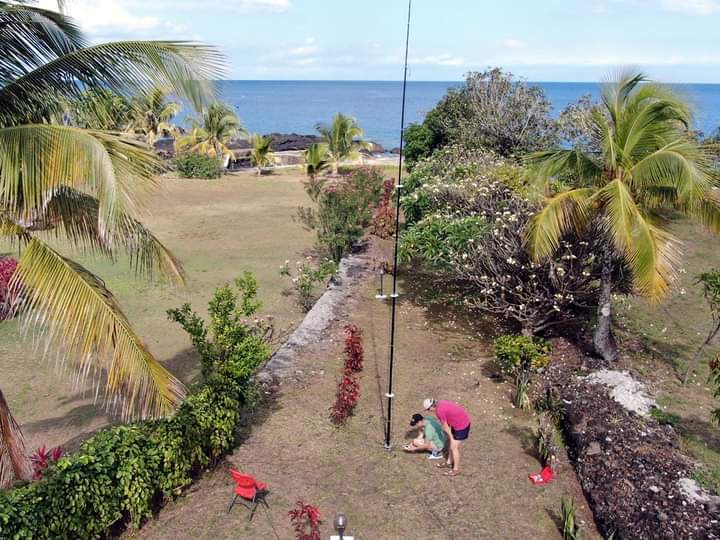 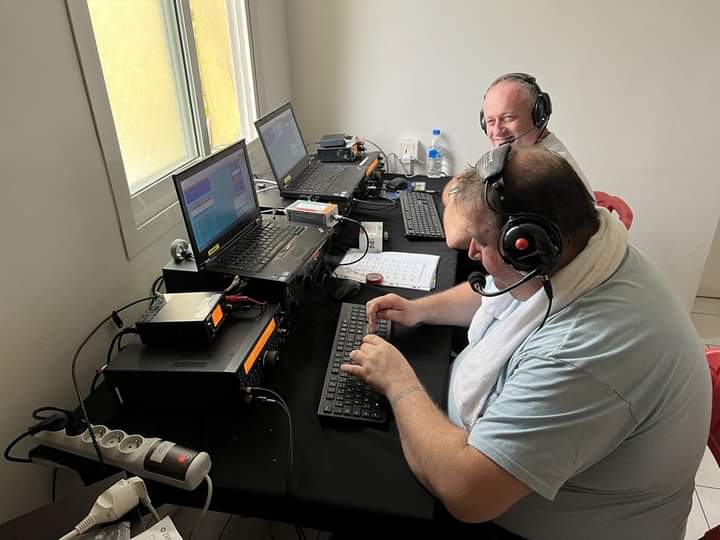 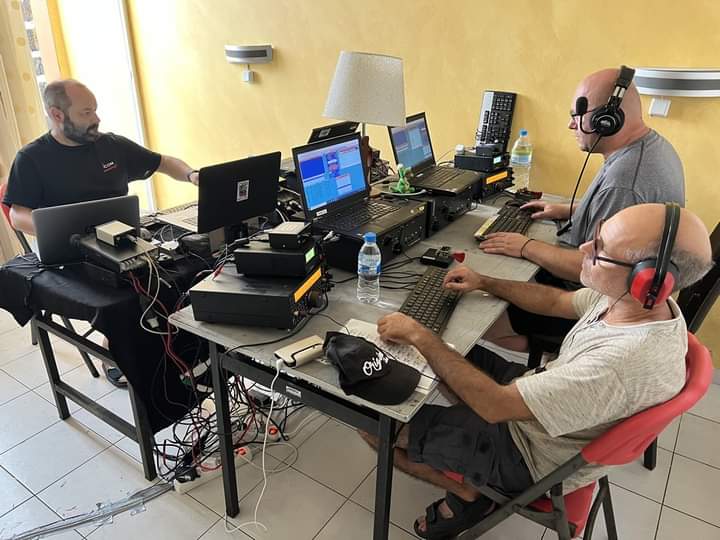 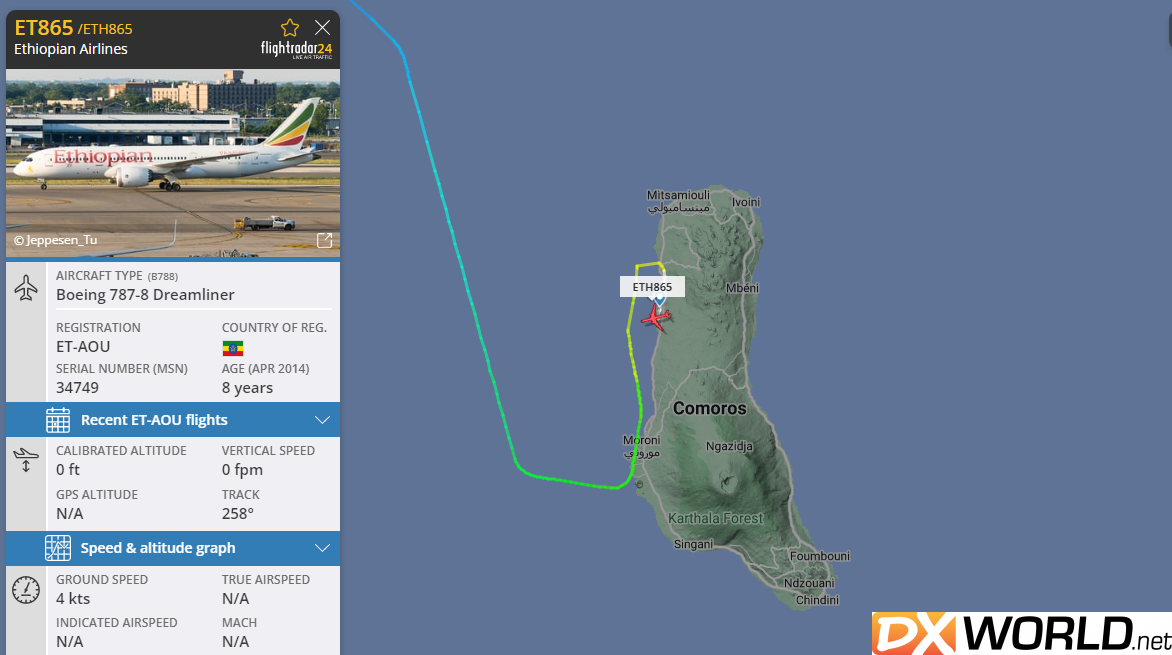 OCTOBER 6 #2 – Shortly before 11am local, the team landed Dar es Salaam flying over Zanazibar on the way. 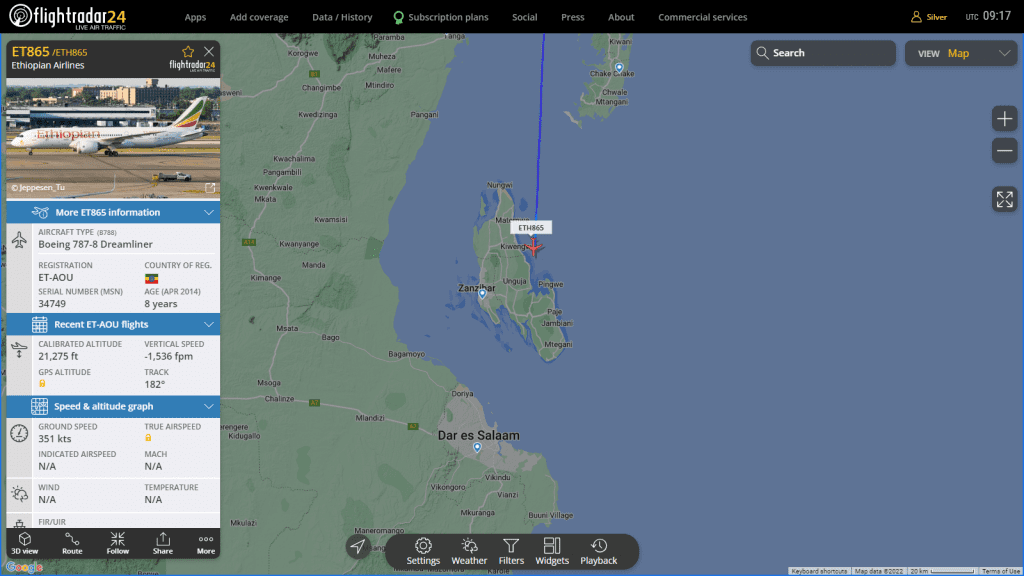 [OCTOBER 6 #1] – All team members are now in Addis Ababa awaiting next flight to Tanzania, followed by another flight later today to Moroni. It will then take 1-2 hours by road to their QTH. 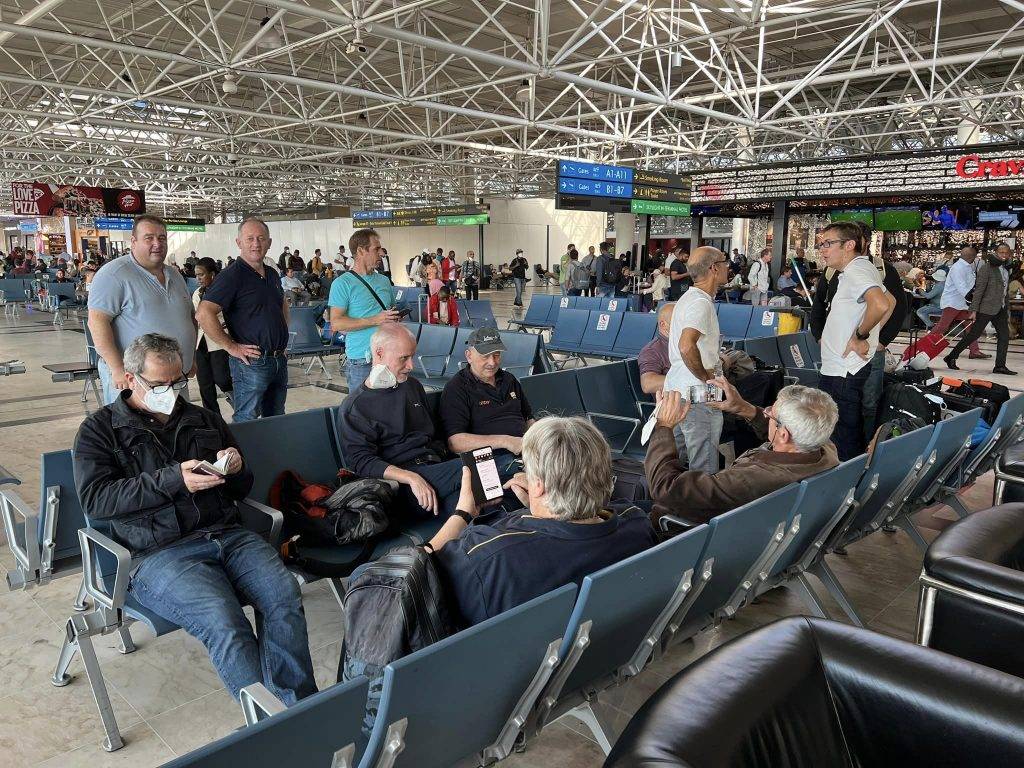 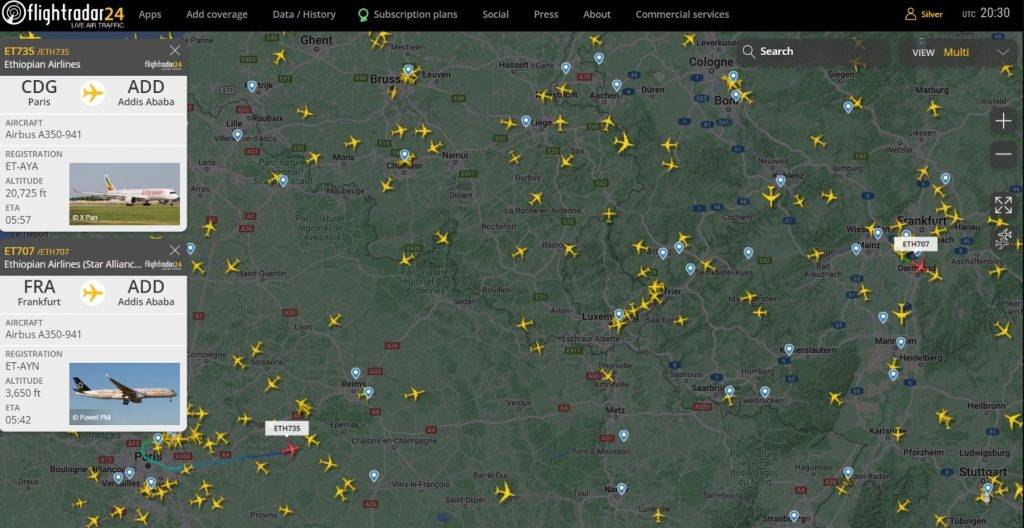