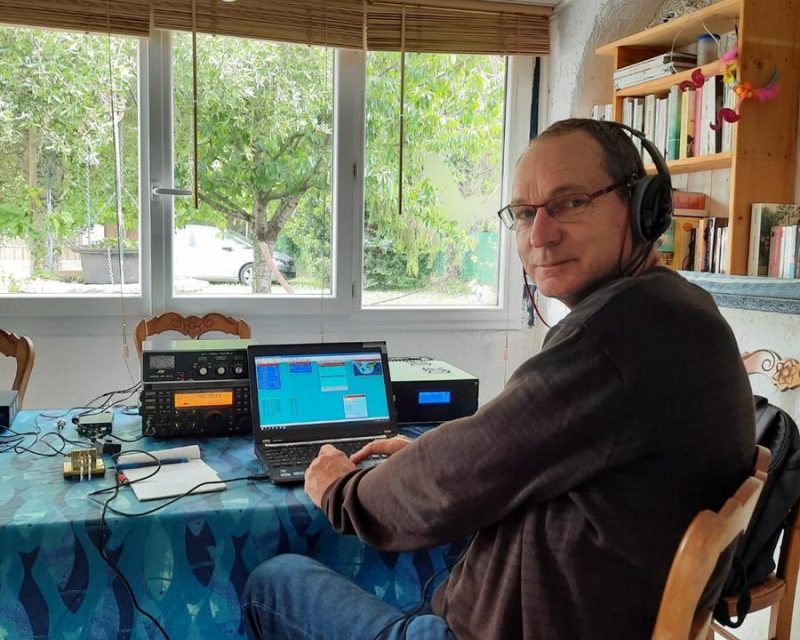 When the large supply ship M/S Marion Dufresne approached Crozet Island just before Christmas of 2022, one of the greatest gifts ever given to amateur radio was on board. A man named Thierry Mazel, F6CUK, and his passion to put Crozet Island on the air and end the 13 years of its silence on the amateur radio bands. Thierry worked closely with his friend Paul Granger, F6EXV, to accomplish his dream. So we now remotely review this man and his partner after his first twenty-one days stint on this lonely island.

So who are these men? What motivated and drove them? What is Thierry experiencing on Crozet. We asked them and here is what they had to say.

Hello to all from Crozet ! I was born in 1957 and licensed in 1975. I am married to a very understanding wife, who allows me to be away from home for such a long time. I am retired, after spending most of my career working in computer services at Michelin, the pneumatic manufacturer. My first DXpedition was to Saint Barthelemy island in 1977, before it was a separate entity. The DX bug bit me hard and quickly. I have returned to Saint Barthelemy a couple of times since, and I have organized and operated from several IOTA expeditions around France. I am not lonely on Crozet. There are 34 of us on the island and we have many different interests — scientific, professional, and now amateur radio.

The first objective of this trip was to give an ATNO to as many people as possible. I discovered that operating the same schedule every day has given all parts of the world the best chance for a contact with Crozet. I take advantage of the 5 hours every day when I may not transmit. This is when I sleep. The pileups are enormous and continuous. Facing them is tiring, but also energizing and satisfying, for I know my QSOs are creating smiles. However, I do not know how long I can maintain this pace and rhythm.

Normally my preferred mode is CW. But signals arriving here at Crozet are very often weak which makes FT8 the only option most of the time. Due to the weak signals, I have put SSB aside. Perhaps I will reconsider it, as well as additional bands, should I be granted an extension of my operation.

There are 34 of us on the island – a cook, scientists, nature observers, maintenance workers, and one amateur radio operator. We eat meals together and share basic tasks like cleaning the dining room. My life here is operating, eating, participating in basic tasks, spending a little social time, sleeping, and trying to take a few photos of this unique place.

Some interesting info : ever since I have been on the island, there has not been a single day without wind, varying from 30 KMH to gusts of 140 KMH. And this is summer time in the southern hemisphere !

As of press time, the extension has not been granted, but since my transmissions do not interfere with the geomagnetic measures taken every day on the island, I am very optimistic about getting the extension. It depends on the French bureaucracy. In the very unlikely event that I would not get it, I could either go to the beach (Not for me, too cold!!), tour the island, or have additional QO-100 schedules with schools in France and Africa.

I imagine every place is unique in terms of getting permissions. For Crozet, we realized that a group of hams would not get permission, while a single person might. In addition, we introduced the satellite link and schedules with boys and girls at schools so they could learn about the TAAF and see what people do in the French Southern Lands . These things helped us gain support and ultimately get permission to spend three months at Crozet. Getting the radio license was the easy part.

Hello all ! Well, the very first ideas of Thierry going to Crozet came up at a meeting we had about two years ago. Since Thierry’s English is limited, I was nominated co-organizer, advised Thierry on a few aspects, gave my point of view on some email exchanges with the TAAF prefect and other people, and wrote the document that would be sent to the major DX foundations and clubs around the world to help finance such an expensive trip. Both Thierry and I were also in contact with several commercial sponsors. I will also do the QSLing, as I have always enjoyed doing this, and will do my best to satisfy impatient DXers hoping to see the long-awaited new entity confirmed with a card. I am also answering many emails received daily about the aspect of this activity, including log check requests. So indeed I never stop.

There is one record that Thierry will have beaten for sure: The number of pirates that who disturbed the DX community. l must admit I will never understand the kind of joy these people are getting.

If I had a wish about the radio amateur community, I would say that I hope we would all come to better understand how it is on the other side of a pileup, and refrain from making insults on the clusters, without knowing what is happening on the DXpedition end.

I often say that our hobby cannot be understood, except by radio amateurs. And in fact, I think DXers themselves know little about the strange places we visit. Getting someone to be on the airwaves gives these islands an exposure, and helps people, even DXers, learn about them. In the Crozet example, the addition of the QO-100 schedules with schools was of great interest to the TAAF, and was one reason why they granted permission for amateur radio from Crozet.

It is obvious that a place like Crozet, which is on the UNESCO World Heritage, has many limitations in terms of impact of any visitors on the island. Two aspects made it impossible to get permission for any sort of beam antenna: bird protection, and high winds. The height of the antenna was also limited, and you can’t imagine the number of email exchanges to finally get to an agreement.

I knew even before getting to Crozet that it would be impossible to please everybody. The demand and expectations are so high that many forget it is a one-man effort, aimed at providing ATNOs. We hoped to show the TAAF what amateur radio is, and are hoping that this operation will help others to happen in the future from these most needed TAAF islands.

Being part of such a special team is a once in a lifetime experience for sure. All of the people aboard the Marion Dufresne had heard that a radio amateur would be traveling with them. So I had already made friends with all of them on board the ship and explained what this trip was all about. My favorite “wine” on the island is tea…. Nobody is perfect! We have a great chef and I wish all DXpeditions could eat as well as I do here!

Well, I did not have much choice in terms of the antenna. The TAAF and Wildlife people involved had to give their approval, so as to minimize the impact on nature. The strong winds were also a limiting factor. So I wish I could have used monobanders, but…

These two fellows first met in 1992 when on the VP8SSI DXpedition and became life-long friends. DXpeditions result in such friendships on a lonely Arctic islands whether harsh or enjoyable but yet strong in their spirit and camaraderie. Ever since VP8SSI they have tried to open up the props of the DXpeditioning backstage and push the understanding beyond the ATNOs. This interview was done with that aim in mind.