AUGUST 5th UPDATE  (as per QRZ.com)

AUGUST 2nd UPDATE  (as per QRZ.com)

6m ES season has more or less ended in 9N and as of the 5th of August, I will be out of the country. Below are some statistics that after all show a pretty decent number of EU stations worked. If you haven’t made it, see you next year and you should seriously think of a better setup and finally buying that amp 😉

The majority of EU QSOs are with zone 15, while contacts with zone 14 and the north part of zone 15, were substantially fewer and openings extremely short. Zone 20 is comparatively less difficult to work, however, the number of active stations is much lower than in zones 14 & 15. Asia is, of course, much easier, which the numbers clearly show. 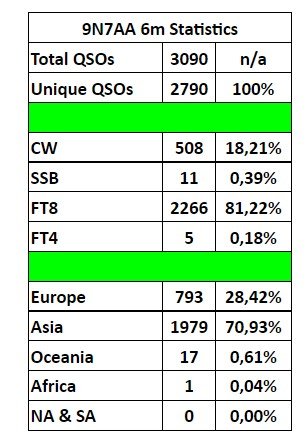 EU openings in 9N are very random, few, and selective on 6m – meaning only stations from a narrow/small geographical area come through, while at the same time I’ve been heard throughout EU with very decent signals. Always wondered how much the fact that I am positioned on the “wrong”, Southern side and just under the massive 7000+ meter Himalayan wall with EU exactly in the same direction, has to do with this very peculiar propagation phenomena.

QRM continues to be prohibitive for any normal CW/SSB on 20m and below, where even FT8 struggles with signals heavily plagued by the local interference/QRM. Higher bands are surprisingly good with substantially less QRM. Please note that  60m is not permitted in Nepal.

QSL via S57DX, direct only, LoTW and Club Log are updated at least once a week. Please use s57dx@yahoo.com for PayPal requests.

Following info was published on the QRZ.com page of Robert, S53R.

9N7AA license has been issued yesterday. T6AA equipment is still stuck in Kabul and we are trying hard to bring it to Kathmandu. I have brought two TS590SG radios and a few basic accessories in my suitcases, so some very basic operation will start soon. A small multiband vertical has been installed temporarily until I move to my permanent residence, where Ultra Beam / WIMO 2el Yagi (40-6m) will be installed at 25m+. Will still have to figure out 160/80m due to very limited space. Note that 60m band is not permitted in Nepal.

The new residence is a high rise with a clear shot towards EU and US. The problem in Kathmandu is very heavy QRM due to open power lines and all kinds of man-made interference. For the time being, an only limited operation is planned but the pace should pick up by end of November and when the rest of the equipment arrives.

QSL for this operation goes via S57DX, direct only, and of course, LoTW and ClubLog will be updated at least once a week.

Please note that 9N7AA was previously issued to UA3AA back in 2014 and is now re-issued to me. S57DX will only handle the QSLs for my operation, from November 2021 onwards.